Some dogs learn their name on their own after weeks, months, or years, but your puppy’s life will be a lot less confusing if you take the time to formally teach them what they’re called. The first lesson to teach your new puppy name recognition is a lot like the “look at me” game. But this time, you want your pup’s name to be their cue to look at you. Only say their name once, and reward them when they look at you.

You should play the simple name game multiple times a day for several days until your pup is reliably responding to their name. From there, you can increase the difficulty by adding distractions and calling their name in unfamiliar environments.

Having a good recall is one of the most important skills to teach your new puppy, but it’s also one of the hardest to perfect. Your puppy won’t be a recall rockstar right away, but learning this lesson early could end up saving their life some day in the future.

American Kennel Club teaches pet parents to train the basics of “come” in a quiet, familiar area. They say,

“First move into a squat position with your arms open wide. Say the word “come.” If she [the puppy] starts moving toward you, give her verbal praise. Whatever you do, don’t reach out and grab her as she gets close to you. That will confuse her.”

To make sure your puppy knows you’re in training mode, use her newly earned name recognition skills. Say her name, and then call her to you. Remember to always use the same language, and only say the cue once. If your pup doesn’t come to you, calmly walk over to them, attach a leash, and bring them back to the spot where you called them. Praise and reward them before trying again.

If a dog only knows one thing, it’s usually the word “sit.” Puppies as young as eight weeks old can learn this skill, and most pick it up quickly.

First, hold your hand with your palm facing up and put a tasty treat on your fingertips. Make sure your pup doesn’t snatch it from you as you hold it in front of their nose. Once their eyes are locked onto the prize, slowly raise your hand above the puppy’s head and say the word “sit.” As they follow the treat, the natural movement is to sit down. As soon as their fluffy bottom touches the ground, tell them how awesome they are and give them the treat. Keep repeating this movement until you teach your new puppy to sit without having the treat in front of them. 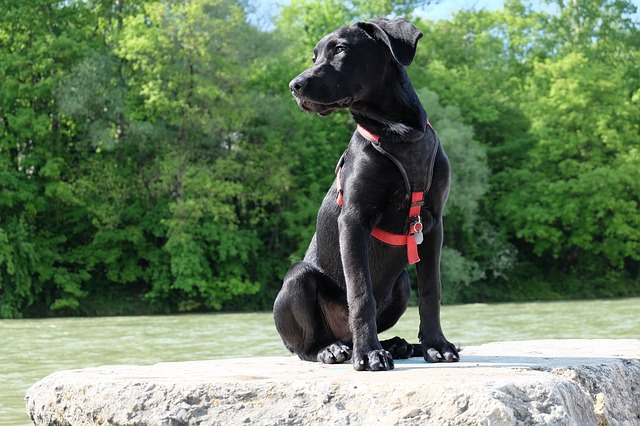 The key to teach your new puppy “stay” is convincing your dog that staying when you say so is more rewarding than whatever else they could be doing. Start by getting your dog to sit still while they’re close to you. Direct them to sit, and then hold your hand with your palm facing them and say “stay” in a firm voice. As long as they stay focused on your hand and don’t move for 20 seconds, give them a reward.

Repeat this process several times before taking a step backward. If your dog moves, guide them back to their original spot and try again. Don’t increase the distance between you and your dog until they’re reliably staying from where you are. As they get better, make them stay for longer periods of time while you get farther away.