Two heartbreaking weeks went by for a family in Lake Los Angeles, California, until they heard a word about their missing dog. The Norris family was shocked to learn their beloved three-year-old Pug Ted was listed for sale on CraigsList.

“It’s my dog, it’s my family. My kids want their dog back. My sons ask every day, ‘when’s he coming back?’ It just breaks my heart that I don’t know when he is coming home,” Samantha Norris told KTLA.

The story began a week prior. Norris, a five-year resident of Lake Los Angeles, and mother to three boys came home from work to let her dogs inside. Her Husky named Bolt ran into the home, but Ted did not. Norris immediately realized her family dog was gone. The Norris family yard was fenced and locked, without a way for Ted to escape. So, she reviewed her home’s security cameras to see what happened. Unfortunately, the cameras weren’t working leaving Norris without any evidence to review.

The family searched the entire neighborhood for their missing dog but were unable to find him. The Norris’ hung fliers around their town and anxiously hoped for a response. 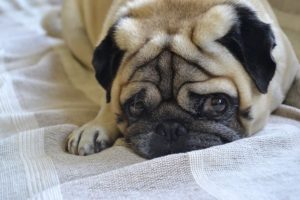 Two weeks after Ted disappeared, someone sent Norris a Facebook message saying they saw the missing pug for sale on CraigsList. The ad listed a purebred 2-year-old pug. It said the pup was healthy, super friendly, and that the dog’s family was moving away so they had to let him go. The cost was a $200 rehoming fee.

Norris immediately called the number listed. Eventually, she connected with the woman who placed the ad.

“She said she did have my dog. She did sell him on Craigslist for $200,” Norris said.

The woman on the other side of the ad said she didn’t steal Ted. She claimed that the missing dog jumped into her van. Then the woman changed the story, saying Ted walked up to her porch. Finally, she told Norris she sold Ted to someone in Glendale, California.

In a surprising twist, Norris found out the woman who sold her dog lived very close to her, less than a quarter mile away. “It breaks my heart knowing he was literally right around the corner,” she said. After this discovery, Norris notified the police because she wants to press charges.

“I want my dog back because he was mine. You shouldn’t have my dog because he doesn’t belong to you,” said Samantha Norris’ 8-year-old son Rhylin Simpson.

The missing pug is microchipped. So, if you live in Southern California and recently acquired a Pug or know someone who has, you can bring the dog to the vet to be scanned. If the microchip doesn’t work, you can also take the dog to local shelters because the pup’s family may have notified them of their missing dog.

Meet Ted and his family in KTLA’s video below.