It’s been about 4 months since an injured stray wandered into a home’s open door in Philly, looking for shelter. She was starving and bone-thin when the surprised homeowners discovered her. It took them a bit to realize this wasn’t a puppy, but rather a malnourished 8 or 9 year old dog.

Suzy, as she was named, could not have picked a more perfect place to seek shelter. The people she’d been waiting her whole life for just happened to live there. They’ve been loving and caring for her since the day they found her in their living room. 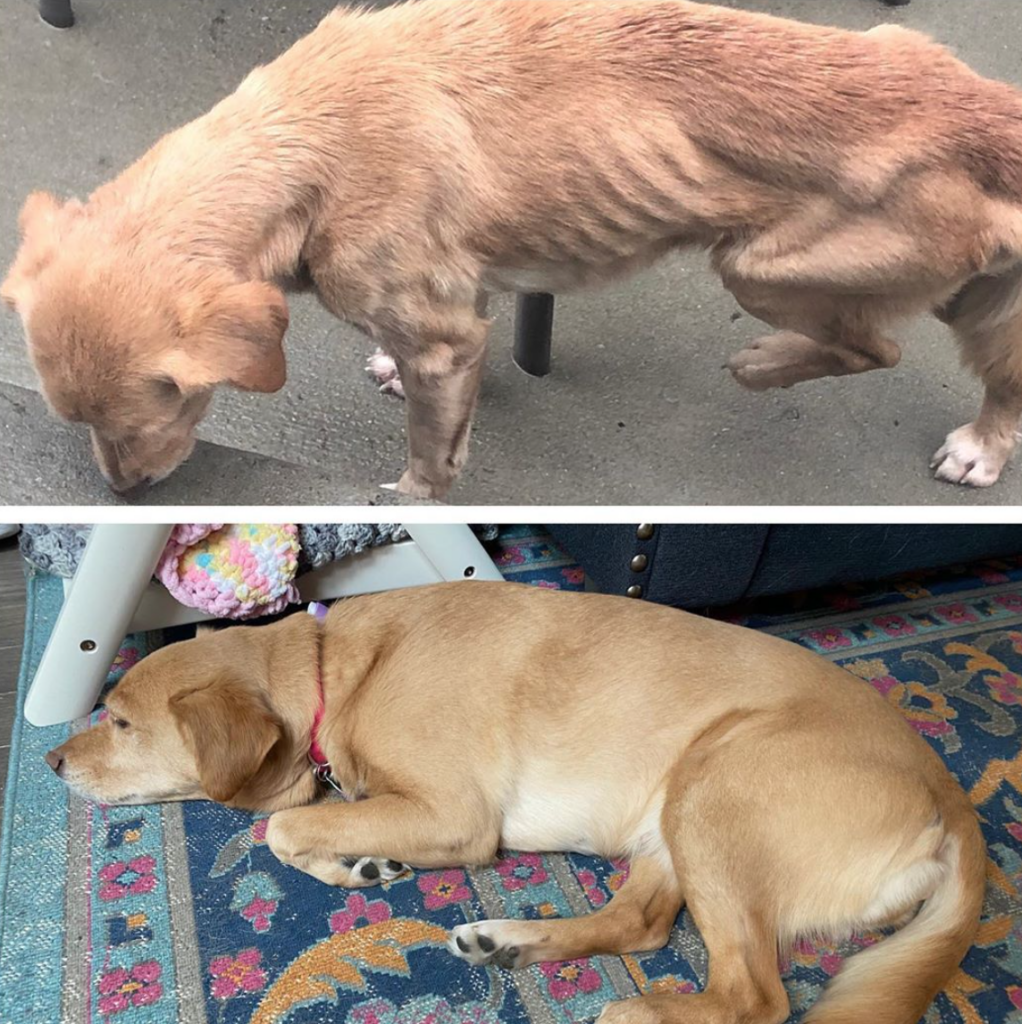 “The top picture is 12/14 when I found an open door in a storm. The bottom picture is today, four months later. Thank you for all your love and support. With a little love, anything is possible!”

Suzy is healthy, happy, and you can’t even see her ribs anymore. She doesn’t even mind sharing things with her new siblings.

Thank God this sweetheart wandered into the right home. Still, not all strays are so lucky. That’s why Suzy uses her Instagram page to post adoption notices for other animals.

Follow her @suzynpupman for more updates that will make you smile!

In a whirlwind few days, a starving stray dog went from living a difficult life on the streets of Philadelphia to becoming a beloved internet star with a family. It’s all thanks to a door that blew open during a storm and the man who later closed it. In that time, the dog sought shelter in the home she would later occupy for life. She just didn’t know it yet.

The pup’s adventure began with a simple, straightforward tweet from Jack Jokinen on December 14th. Along with a photo of her were just the words:

“I just woke up to this puppy in my house and we have no idea how it got here.”

Naturally Jokinen and his wife Emily were confused. All the doors in the house were closed. Their baby was fine, and no one else was there.

A security video revealed the family’s back door had been left unlocked accidentally and the dog simply wandered inside when a storm blew it open, around 3am. Amazingly, the footage shows a neighbor noticing the open door, trying to alert someone, and then closing it. But that kind stranger closed the wandering stray dog inside, not knowing she didn’t live there.

Jokinen told Today there could have been many things that drew her to their house.

The confused dog “was scared, limping, and malnourished.” Jack and his wife had reservations about dropping a sick stray off with animal control. They decided to take her care into their own hands.

JJ continued to update Twitter on the dog they named “Suzy” as more and more fans tuned in. He took her to the animal hospital to get checked out. The poor girl had a lot going on. She had fleas and ticks, dental problems, and injured paw pads.

She also weighed only 19 pounds when she should weigh between 35 and 40 pounds. Because Suzy is so small, she looked like a puppy. It turned out that this was no puppy- she’s actually between 7 and 9 years old.

Suzy was scanned and had no microchip. At this point in the Twitter thread, people started to say the dog pretty much belonged to the Jokinens. Many even chipped in with donations towards Suzy’s care. Via Venmo, they raised over $15,000. Jokinen hopes it won’t actually cost that much, and the couple plans to donate all excess to an undetermined charity.

In the end, it was fated for Suzy’s adopters to be the ones who discovered her in their living room. Her rescue was ultimately a team effort, Jokinen said.

“It’s the holiday season and it’s not about us, it’s about this dog that people have found faith in. It’s about this guy Steve, who walked past my house and decided not to take my wife’s wallet but to close the door. We’re simply the vessel of this story, and anything we do to keep it going and spread the awareness that there are good people out there … Suzy is not really our dog. She’s kind of the Internet’s dog at this point.”

There’s a lot more detail to the thread including extra pictures and videos, so definitely give it all a read!

How Is Suzy Doing Now?

Thankfully, Jokinen is pretty active on Twitter, so we’re getting plenty of updates. Now that she’s getting treatment and proper warmth and feeding, Suzy is already doing infinitely better than she was days ago. Right now they’re working on getting her weight up.

“A pupdate on how Suzy is healing up. She is filling out more and more, but we have to take it slow. She stays off her injured leg most of the time but is getting more comfortable with it.”

She’s getting more comfortable in her home. She also gets along great with the human baby!

Suzy plays by her own rules pic.twitter.com/uc58UdSSbD

You know Suzy’s really made it by the fact that she’s on Instagram. She’s also on Facebook.

Thank God she found the right door that day!