A truck driver turned hero was driving along Interstate 81 on a cold winter’s day in upstate New York when he witnessed an unthinkably cruel and disgusting act. From the window of a rusted out Dodge Durango he saw someone throw two dogs to the side of the highway like trash. He immediately pulled over to render aid.

The pups turned out to be Beagle mixes, one an adult of 6-8 years old and the other an adolescent around 1 year old. The older dog was torn to bits, with a terrible leg injury and obvious points of pain all over his wrecked body. Thankfully, the younger dog only suffered a few abrasions when he met the cold, hard road. 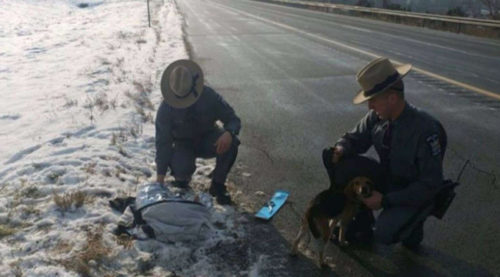 State troopers were called to the scene and an officer trained with the K9 unit responded. He  wrapped the severely injured puppy in bandages to stop the bleeding and placed a splint on his badly hurt leg. The older pup stood by, gratefully receiving comfort and treats from his saviors.

The dogs were taken to the Broome County Humane Society where they were given medical attention, love, and names. The older was christened Trooper, after his State Trooper rescuer and fighting spirit. The younger was named Adam after the truck driver whose decision to pull over saved the both of them. 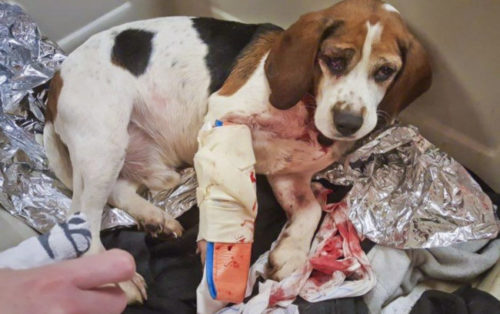 Amberly Ondria, shelter manager for the Broome County Humane Society, told the Associated Press of the severity of Trooper’s injuries. Due to the cruel act inflicted upon him, he suffered a compound fracture of his distal radius, broken ribs, contusions to his lungs and shoulder, and his leg was so severely injured that it had to be amputated.

Adoption Applications Flooded in for the Pair

After sufficient recovery time with Adam at the Humane Society Shelter and Trooper with a foster family, the pair were opened up for adoption. As you can imagine, applications flooded in with over 100 received in all. In a 12 News exclusive, the Humane Society shared that the pair were being adopted by a couple in Earlville, NY named Connie and Roger. The pups’ new mama Connie told 12 News WBNG “They’re full of energy and you would never think that something this tragic happened to them,” said Connie. 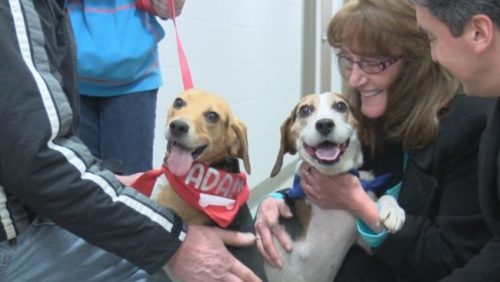 The perpetrator of this heinous act was never brought to justice but we hope he or she never has the opportunity to feel the love and adoration of a dog again. They certainly don’t deserve the devotion. For Trooper and Adam, all is well that ends well and we hope they live a long, happy, love filled life in their forever home.