iHeartDogs recently received an urgent plea from Kayla Murray with Austin Animal Shelter on behalf of Rex, a dog with only days left. If you, a friend, or a rescue can give Rex the time he needs, please contact orangedotcrew@gmail.com.

“Some dogs are just dealt unfair hands. And when that happens, it is up to the dog’s advocates to change their luck. So, here we are, hoping that the next chapter of Rex’s life will be the one that finally brings him the love and happiness he deserves.

“Rex’s former owner did not manage Rex’s environment, and allowed him and his other dog to run loose in the neighborhood. He had no guidance, no structure, and most importantly, no stability. As a result of this neglect, Rex bit someone and ended up at Austin Animal Center, and now shelter management has mandated that we have until October 30, 2018, to find Rex a new home, or he will be euthanized. As those of us in the dog rescue world know, that is an almost impossible timeframe. But we have promised Rex that we will try, so this is us, trying. Trying to save his life. Hoping that you will help us try.

“When we first met Rex in June, he was cautious but friendly. Rex did not respond to basic commands like sit, and he was not interested in playing fetch or tug. It appeared he was not used to anything resembling basic standards for dog ownership and companionship. However, after a few engagements with volunteers, Rex really opened up and, most importantly, he started responding positively to his handler. Rex now focuses on us, looking for guidance rather than making his own decisions. He is affectionate with us, and has softened and relaxed greatly. Rex has even started soliciting belly rubs, which is a sign of trust. “Without a doubt, Rex LOVES his people. When he sees a member of his shelter family approaching his kennel, his entire demeanor changes: his eyes light up, his tail is wagging as fast as possible, and if a dog can smile, well, then, he does that, too. Once you step inside his kennel, you are greeted with a hello bark,  doggie kisses, and some playful nudges. 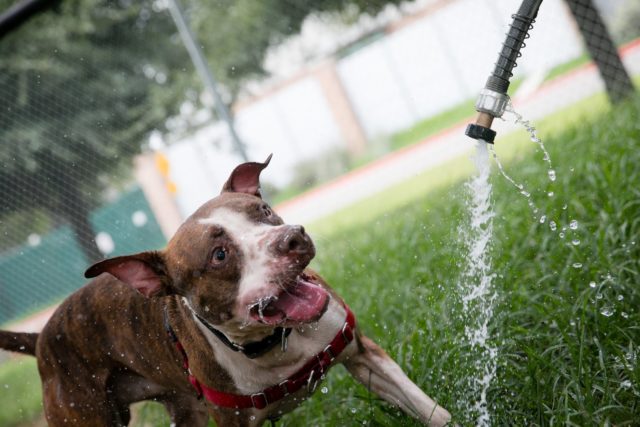 “Rex is accepting of, and playful with friendly dogs. While his interactions with other dogs at the shelter has been limited, he has met other dogs through opposite sides of a fence in the play yard. During these instances, Rex exhibits playful characteristics: play bows, sniffing, tail at middle height and wagging, and running back and forth along the fence with his new friend. He also lived successfully with a smaller dog in his previous home. “Rex’s needs are simple: a loving family who will play with him, give him yummy treats and a soft bed, rub his belly, and keep him safe. We are willing to transport Rex to anywhere in the country if a loving adopter is found. We will also pay for an approved, rewards-based only trainer in their area. We understand that a dog with a bite history can be off-putting. And while we don’t know all the details surrounding that incident, and what Rex had experienced prior to the incident, we can vouch for Rex’s playful, loving nature that we have observed during his stay at the shelter.

“Please email us at orangedotcrew@gmail.com for more information.

“And of course, even if you are unable to make Rex a member of your family, please share this post. Rex’s life genuinely depends on it. Thank you.”