Look: Flirting is hard. The best among us sometimes need our “wing” men and women, friends who are willing to talk us up to our crushes without getting in the way. For 21-year-old Alli Gardner in Indiana, her wing “woman” was less of a woman and more of a female dog.

The dog’s name is Miley, and she’s a beautiful Beagle who catches everyone’s eye. Everyone including Sid, the roommate of a friend of Alli’s who came across an Instagram post of the adorable Miley. He sent Alli a private message.

Sid’s message read: “If you let me pet your dog, I will be your best friend forever.” 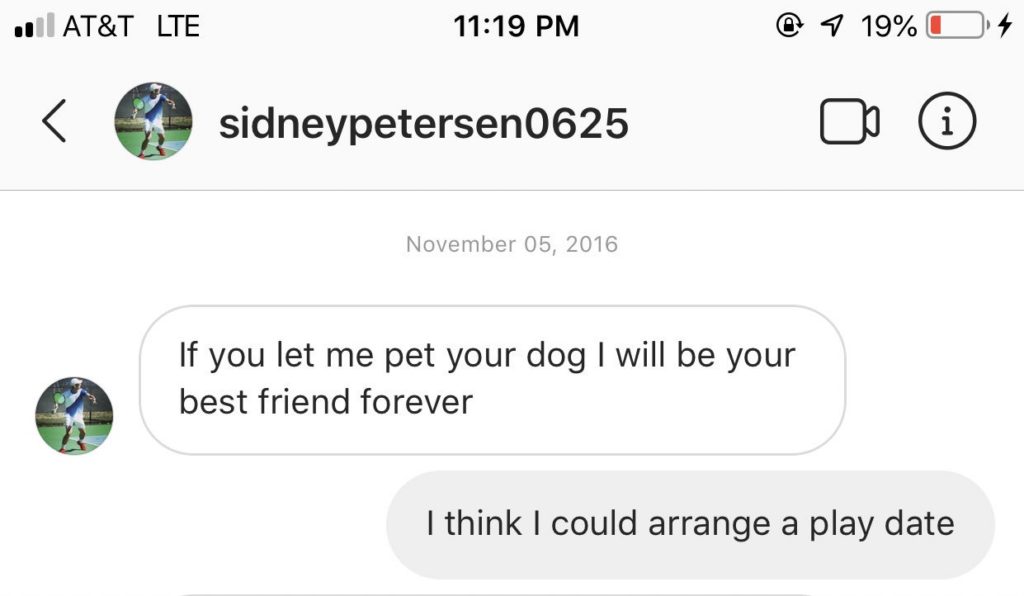 Alli admitted to Lad Bible she had already seen Sid’s profile and developed somewhat of a crush on him.

“To make a long story short I looked at his profile for, like, five months just hoping he’d notice me somehow! Then one day he told me he was on the explore page and saw a picture of me and my dog and sent me a DM.”

Even though she was excited to hear from Sid, Alli played it cool with her response: “I think I could arrange a playdate.” From there the two continued to exchange messages before finally going out on a date.

According to Alli, the couple had an instant connection. They dated for three years before Sid decided he wanted to be a permanent dog parent to Miley. He asked Alli to marry him in August, 2019.

To announce their engagement Alli shared the photo of the Instagram messages that started it all, along with pictures of Miley and all three of them together. Naturally, something this adorable and heartwarming blew up on Twitter, reaching over 106,000 likes.

3 years ago this boy sent me a dm about my dog, now we’re getting married! Shoutout to my pup for being the best wing woman. We both scored with this guy 💛 pic.twitter.com/eFPErSSAym

Alli is completely floored by all the attention, but grateful her (and Miley’s) story has resonated with so many people.

“I feel blessed that I have found someone so incredible and loving towards me. I didn’t expect this post to blow up but when it did it brought us closer together because we were able to reminisce on our relationship.

To answer your next question: yes, Miley absolutely will be the “Dog Of Honor” in the couple’s wedding, they confirmed. They’ve already purchased a dress for her to wear during the ceremony.

Congratulations to Alli and Sid, and is Miley available to come out with me this weekend?